We are in week two of Destiny 2-a-palooza, and we have made it to the end of the raid (but have not finished it)! In between horrible Crucible matches, Ben has found the time to finish FFXII, Mike has started Mario + Rabbids: Kingdom Battle, and Jake continues to chip away at Mass Effect: Andromeda.

Lots of announcements between the Nintendo Direct and Tokyo Game Show: Monster Hunter World has a (very soon) release date, FFIX was announced and released for PS4, Dragon’s Crown Pro was revealed, Zone of the Enders is getting a remaster and VR support, Picross S is coming to Switch, Super Mario Odyssey has a Switch bundle, both Doom and Wolfenstein: The New Colossus are releasing on Switch, and lots of new content coming for Rocket League in the Autumn Update!

For our Top 5, we take a deep dive and talk about our favorite TV shows!

Follow us on Twitter at @NWMPod, visit our website at nwmpod.com, and leave us a review on iTunes or Google Play Music, we greatly appreciate it!

This site uses Akismet to reduce spam. Learn how your comment data is processed. 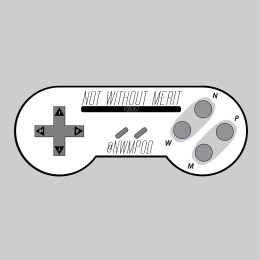 Each Thursday, we gather to talk the games we’ve been playing, the latest gaming news, and our Top 5 of the week!

For all business inquiries: notwithoutmeritpodcast@gmail.com